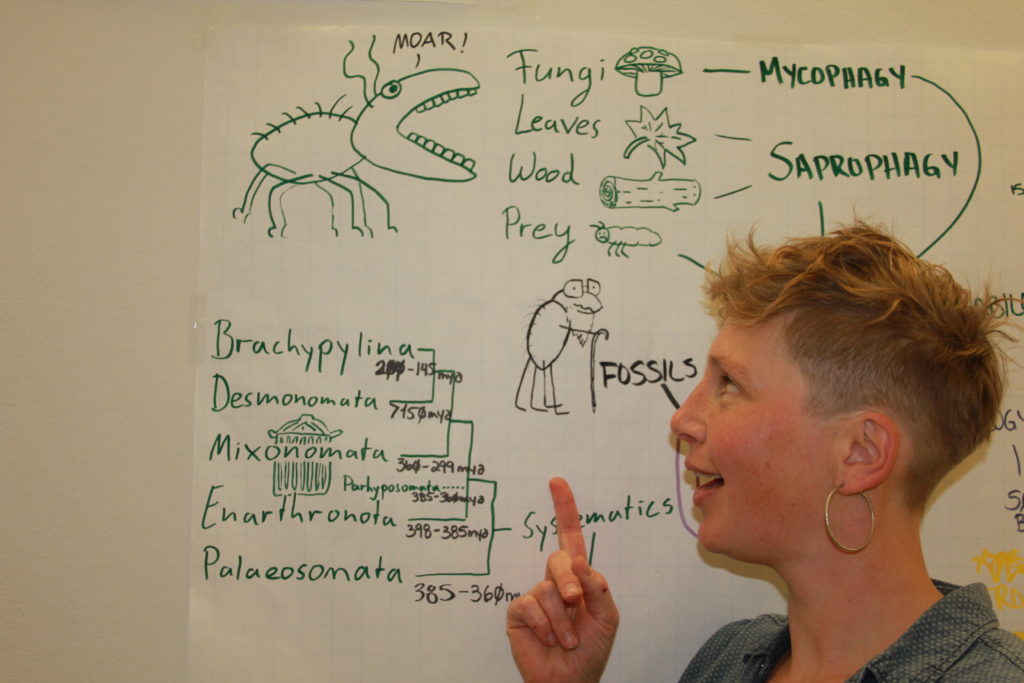 Soils are old from an evolutionary perspective and so are the species that evolved within soils.

The terrestrial soil system is very old. The two famous fossil sites at the Rhynie Chert in Scotland (~410-400 million years old) and from Gilboa in New York (379-376 million years old) we know that a variety of invertebrates, vascular plants and fungi already lived in soils as early as the Devonian, forming already functional communities and simple food webs. However, the origin of tererstrial soils and of the animals that live within likely are much older.

The diversity in soil is high, but yet little unerstood

The soil system harbours an astonishingly diversity of small vertebrates, in particular oribatid mites and Collembola. These animals are central players in the soil food web and are known as fossils from Rhynie Chert and Gilboa. So they have been evolving in soils at least since the Devonian.

However, the evolution, the diversity and the function of these two animal groups is yet not well understood.

The soil system is intricately linked with the above ground system via nutrient cycling. Nutrients enter the belowground system via dead organic material of plants and nutrients that inadvertently leak into the soil via the root system. The soil fauna plays an important part in processing these nutrients and making them again available for plants. These interactions likely have been evolving for hundreds of millions of years.

In my research I investigate the evolution of soil animals in the context of the ecological niches they occupy in soil. Species diversity and functional diversity are not stationary but are always changing due to adaption and selection.

To understand how diversity in soil developed over time I use molecular phylogenies and functional traits of soil animals to infer the evolution of animal diversity and their ecological role over deep evolutionary times.

My model organisms are

Oribatid mites (Acari) because they evolved within the soil system and play an important functional role in the soil food web.

Collembola (Hexapoda) because they are of similar evolutionary age as oribatid mites but likely differ in their functional role.

Comparing the phylogenies and trait evolution of these taxa provides a key to understand the evolution of soil systems.

If you are interested in the evolution of the soil system and/or the methods I use, please visit my page at: https://www.uni-goettingen.de/de/117468.html or contact me directly ischaef@gwdg.de